It was all smiles when Sunila Wati of Nasinu picked the $30,000 grand prize. Wati is the winner of the Vodafone & Shop n Save Text and Win promotion.

Unique Vodafone Christmas in the Park

Vodafone Fiji is ready to once again launch its Christmas in the Park celebration to kick start the festive season leading up to Christmas and the New Year. More than 10,000 people are expected to converge at the My Suva Park for the annual ritual culminating into the lighting of the Christmas tree at 8 pm.

Vodafone Fiji wishes to advise that some customers on its network have been receiving text message from unknown overseas phone numbers asking them to contact them with details to claim their prizes or collect their financial reward.

"Our youth bring great ideas. It just needs to be tapped, morale boosted and with little seed money to start their projects. They have the potential to make it grow, said Manager Central Eastern, Ministry of Youth and Sports, Mr. Iowane Soko.

Vodafone ATH Fiji foundation handed over $2500 to Lovu Youth Club for Internet Café to be used by the residents.

The income generation projects will include devices and data free for a year. The club has the leeway to generate revenue to ensure sustainability of the project. Revenue generated can also be used to purchase more devices to meet the demand, said the Vodafone ATH Fiji Foundation Executive Ambalika Prakash.

Fiji Airways Flights Can Now Be Purchased through M-PAiSA 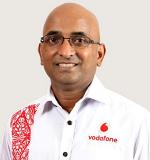 Vodafone Fiji has embarked on a historical investment in mobile network infrastructure development in Fiji. Vodafone is now the primary internet provider to over 780,000 Fijians in the country and has over 1 million active connections on the network as customers have multiple data and voice connections.

Congratulations to Our U20 Ruggers

The Vodafone Fiji U20 rugby team has qualified for the World Rugby Championship after a lapse of 4 years.  The team qualified after thrashing arch rivals Samoa 58-8 to win the Tier 2 World Rugby U20 Trophy.

Congratulating the team, major sponsor Vodafone’s Regional CEO Mr. Pradeep Lal said, “It’s a deserving win.  The team has won its rightful place in the top tier competition after remaining unbeaten in the World U20 Rugby Trophy playoffs.  Congratulations to the players, officials and coaches.  You all have done Fiji proud.”

In the first 11 months of operation, eTransport has recorded over 110 million successful “taps”, averaging around ten million taps per month. An average of $11 million has been spent monthly by commuters on eTransport Top-ups since the rollout of the initiative in October of last year.

The latest edition to the Samsung Galaxy Note series is now available at all Vodafone outlets retailing from $2499. Samsung went one nudge up releasing Note 9 with a much bigger screen, powerful battery, expandable storage space and an intelligent camera that makes it nearly impossible to take a bad shot.

“Vodafone’s Chief Marketing Officer; Mr. Rajnesh Prasad said as an introductory offer we are giving away customers with a free LED View Case and a Duo Wireless Charger upon purchase of the all new Note 9 device.“

A facilitative environment to bridge the digital divide in rural areas and connecting the unconnected is the purpose of the Mobile for Good programme under which technological devices are being rolled out in rural areas and schools by the Vodafone ATH Fiji Foundation.

This was evident when 27 Talaiya Muslim Primary School students faces ignited with smiles as they, through the school, received 6 technological devices worth over $2,500 with free Wi-Fi connection for a year.

Vodafone ATH Fiji Foundation under its Sustainable Funding Programme handed over a total of $7,500 grant to three (3) communities based organization (CBO) in the Province of Ra for income generation projects that will assist in sustaining the livelihoods of young men and women members of the organizations.

Traffic law offenders will now receive notifications of their offence through SMS.
For this, the Land Transport Authority (LTA) signed an agreement with Vodafone Fiji at the LTA Head Office in Valelevu Nasinu, today.
The Land Transport Authority, Board Chairperson, Vijay Maharaj and Vodafone Acting Chief Executive Officer, Ronald Prasad signed the agreement to reaffirm their commitment to this new initiative which was in-line with LTA’s goals, to increase customer service efficiency.

Feel the Rythm with Vodafone

Vodafone Fiji launched Fiji’s first music streaming app – “Rythm-Feel the Beat” with over one million songs to choose from.

We are excited to have launched yet another great service; First in Fiji.

Vodafone Fiji was invited to University of the South Pacific for a careers session last week at the USP's ICT Centre. 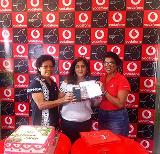 Vodafone Gives $25,000 Worth of Prizes for Mother’s Day

Ranjeeta Devi of Lautoka was announced the winner of Vodafone’s Mother’s day promotion today. Devi was all smile when $25,000 worth of prizes handed after only sending in two entries for the promotion.

Vodafone Fiji reaffirmed its support to the Tebara Carnival for the 3rd successive year after signing of the sponsorship agreement between the Festival Committee and Vodafone today.
“Our contribution back to the community unparalleled in the country and is driven largely by our passion for the community.

Get the Latest Galaxies with Vodafone!

Vodafone wishes to advise its valued customers in the Western Division that network interference screening exercises will be undertaken from 28th February to 1st March.

Two from West Win Big With Vodafone and MH

Mr. Jiale Lenoa of Drasa in Lautoka and Mr. Albert Buksh of Laselase in Sigatoka could not believe his luck when handed over the keys to their new vehicles. 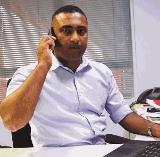 Vodafone ATH Fiji Foundation handed over $2500 to Navola Youth Club which is in the vicinity of Vatukarasa in Tikina Komave, located on the Coral Coast highway.

“The youths were all at the farm when the Vodafone Fiji Foundation team visited the village”, said the Foundation Executive, Ms. Ambalika Devi Prakash.

Vodafone ATH Fiji Foundation in partnership with Western Charity Alliance handed $5,000 to ICare, a ‘love’ home for a group of disadvantaged children.

"When we care,  we transform behaviours and talents, and when we transform  lives, especially the lives of the disadvantaged,” said the Foundation Executive Ambalika Devi Prakash

A Police Officer from Valelevu could not believe his luck when announced the main winner of Vodafone's Xmas Promotion of $50,000.  Sailosi Vodonaivalu thanked Vodafone for giving him the opportunity to take part in such a promotion.  "It is the much needed funds that I will use to invest for my family house", said Vodonaivalu